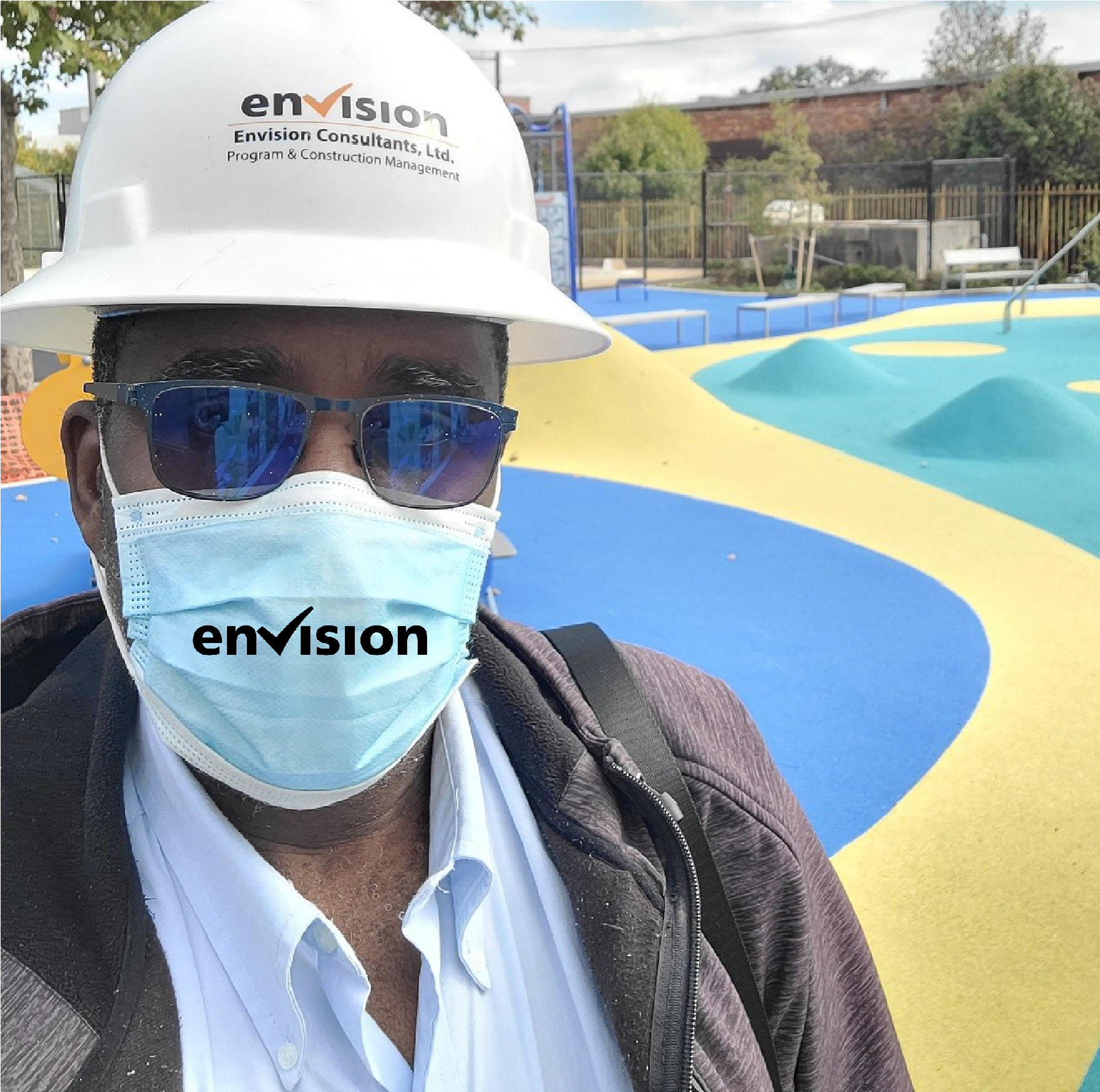 On a night of heavy rain two years ago, Envision Construction Inspector Rui DaSilva wasn’t safe at home with his family. Instead, he was on his way to a project site at the Philadelphia International Airport, to check the roof of his current assignment for any leaks after a day of heavy rain. DaSilva didn’t find any leaks that night, but he did bump into Envision Executive Vice President Steve Malaszecki, who was returning to Philadelphia from a business trip on a late-night flight. Malaszecki was surprised to see DaSilva there.

DaSilva is humble and his matter-of-fact approach is what makes him a great inspector. “You do whatever it takes to find the issue so it can be resolved,” he said during a recent interview.

DaSilva has spent most of his 11-year career as a field engineer and inspector on projects for the City of Philadelphia, the Philadelphia Youth Center, the Philadelphia School District, the city’s Rebuild program, and the Philadelphia International Airport. Prior to COVID-19, DaSilva was assigned to the airport, where he inspected myriad work under a multi-year, on-call task order contract. After a brief furlough due to COVID-19 in March, DaSilva is back to work—this time at Rebuild, a multi-year program to improve the city’s parks, recreation centers and libraries. Projects range in value from $50,000 to more than $13M, and parks, recreation centers and libraries in neighborhoods with the highest need have been elevated to the top of the Rebuild list. Scopes range from fixing roof leaks or aging boilers to complete tear-downs and reconstructions. According to the city’s Rebuild website, about 90 percent of the city’s more than 400 parks, rec centers and libraries are in need of some kind of repair or rejuvenation, and the program is seen as a vital link in rebuilding some of the city’s most impoverished neighborhoods. DaSilva is responsible for inspecting work on various Rebuild projects, confirm that contractors adhere to mandated safety protocols and social distancing, managing project documentation, and tracking incomplete work and confirming it meets the city’s goals as well as regulatory benchmarks.

DaSilva said he tries to foster a sense of collaboration among contractors and subcontractors, while still holding them to the same high bar he sets for himself.

“It’s important to remember who pays your paycheck, and that it’s the owner; not the contractor. We’re here to work together and get the job done. I like that last day, when you can see the transformation from rubble and disorder to this beautiful, functional building.”  DaSilva said.

Hard work is something DaSilva knows well. He’s held a variety of jobs since immigrating from Angola, in central Africa, escaping a deadly civil war at 16. He attended Cheltenham High School while living with an uncle, and then went on to attain a Bachelor of Science degree in Engineering Technology from Temple University. Along the way, he drove a taxi, and refurbished homes for a realtor and home renovator who promptly hired him after a fortuitous taxi ride. DaSilva also managed to co-found a band, and still plays drums, lead guitar and bass with friends when he’s not busy with work or his family.

DaSilva said he learned an important lesson early on, imparted by the man who introduced him to construction. “He told me that you only have your name, and your reputation. That is what makes you you,” DaSilva remembers.

DaSilva’s former boss didn’t need to teach him to love his work. That came naturally, and DaSilva said he feels fortunate to have loved each job he’s held. But, the construction industry feels like home, he said.

He particularly relishes project start-ups, and the sometimes-chaotic work environments they entail. “I enjoy when the project is starting, when the work is just beginning and the challenges are flying, and there are discrepancies in the drawings and everyone is running around trying to figure out how to resolve the challenges,” DaSilva said.

He also likes the investigative part of his job, which allows him to pinpoint challenges and develop ways around them. DaSilva even loves fulfilling punch-lists at the end of projects.

“It requires a bit of psychology. You tell them what is per spec so they can correct the issue in a way that guides them, but you don’t force them,” he said. “You try to be honest from the beginning, and make it clear that you are willing to work with them, to help them, but that the owner is in charge.” DaSilva added.

Working in older recreation centers or school buildings is challenging, DaSilva admits. Historical building plans often are incorrect or out-of-date, and unforeseen conditions can play havoc with carefully charted project schedules and budgets. Work also must proceed while facilities are occupied, and safety and security are vital to keeping everyone safe. Work at the airport was different, but equally challenging. The Terminal F project was a complex mix of both new construction and renovation, and necessitated strict security and safety protocols. Now, DaSilva is working in West Philadelphia, on the refurbishment of a city recreation near the Philadelphia Zoo. Work is proceeding despite COVID-19, and DaSilva likes the change of pace from one job to the next.

Stay connected with Envision by following our LinkedIn Page.