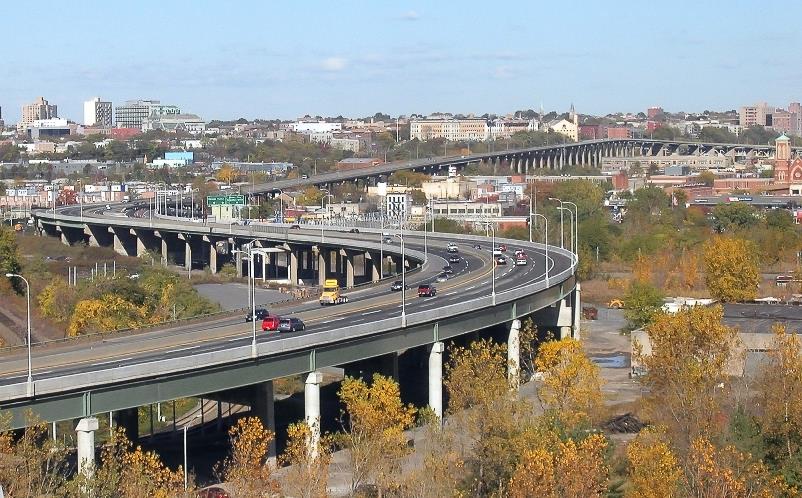 Originally built in the 1950’s, the Newark Bay-Hudson County Extension (NB-HCE) acts as one of the three main arteries from New Jersey into New York City. In order to maintain this roadway, Contract T100.321 was formed to carry out the rehabilitation of a 1.1-mile section of the NB-HCE elevated roadway. The contract serves as the second phase in reconstructing the bridge deck of the viaduct and ramp structures in the Newark Bay-Hudson County Extension, east of Interchange 14C.

The first phase was recently completed under Contract T100.125, which involved reconstructing the bridge decks of viaduct and ramp structures in the westbound roadway. During reconstruction, The Mainline Section and the Ramp Section of the roadway will be worked on. The Mainline Section maintains all existing lanes of traffic during peak hours by permitting one lane of the eastbound traffic to cross to the other side of the median. The Ramp Section will be performed in two stages, each allowing one lane of traffic through the work zone (current configuration has two lanes).

Envision was responsible for the creation and management of the project website (www.njta14c.com), project email, and project hotline. Duties included creation of a stakeholder database, managing all public inquiries and coordinating with the project team on developing traffic advisory notices. Envision was also tasked with creation of outreach graphic materials, such as project fact sheet, project logo, and construction update documents. GIS was incorporated in the development of traffic pattern maps that were used to inform the public of upcoming construction efforts.